In the large, everything is functional (This has been formalised into Hyrum’s Law: “With a sufficient number of users of an API, it does not matter what you promise in the contract: all observable behaviours of your system will be depended on by somebody.”) 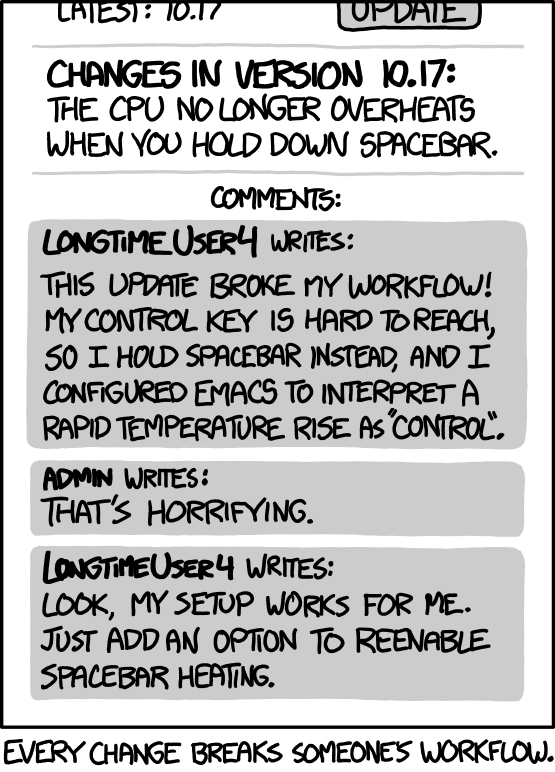 I’ve noticed that if you call something ‘non-functional’ it immediately becomes deprioritised, a tier two requirement. What people hear is “this would be nice to have but we don’t think anyone important actually cares much about it.”

As an example from Wikipedia, take performance requirements. They say that ‘software shall run in time X’ is a non-functional requirement. Well, it’s not important until it is. If there are no deadlines, there is no problem. Is it even a requirement? But if your software has to process a bank’s worth of securities in two hours, it is a requirement. ‘Non-functional’, my horse.

The danger of reflexively saying ‘it’s performance, that’s non-functional’ is the team doesn’t pay attention to it until too late. Just eliminate the category.

You can find out more about which cookies we are using or switch them off in settings.

This website uses cookies so that we can provide you with the best user experience possible. Cookie information is stored in your browser and performs functions such as recognising you when you return to our website and helping our team to understand which sections of the website you find most interesting and useful.

Strictly Necessary Cookie should be enabled at all times so that we can save your preferences for cookie settings.

If you disable this cookie, we will not be able to save your preferences. This means that every time you visit this website you will need to enable or disable cookies again.